The Old Dawson Trail is the remnant of the first all-Canadian route that linked the Great Lakes with the Canadian prairies. It was a water and land route that began at Port Arthur, Ontario (now Thunder Bay) and ended at St. Boniface, Manitoba (now Winnipeg). The land portions of the trail are usually referred to as Dawson Road.

In 1857, the Government of Canada commissioned engineer Simon J. Dawson to survey a route from Lake Superior to the Red River Colony, thereby allowing travel from the east without having to take the existing routes through the United States. Dawson surveyed the route in 1858 and construction began in 1868. The entire trail, including the roads, was completed in 1871 and afterwards named after Dawson.

The Wolseley Expedition used the trail before the route was completed to reach the Red River Colony and quell the Red River Rebellion of 1870. This rebellion led to the establishment of the Province of Manitoba later that year. In 1873, the Dawson route was used by some 1,600 people, however, most travelers still preferred to use the much less arduous southern route through Duluth and Emerson. Much of the Dawson Trail was abandoned after the completion of the railroad between Fort William and Winnipeg in the 1880s, although local residents continued to make use of the roads.

In Manitoba, Dawson Road formed the original course of Manitoba Highway 12 from St. Boniface to Ste. Anne. The southern part of Highway 12’s current alignment forms Manitoba’s segment of MOM’s Way; Dawson Road is now part of Provincial Road 207 between the communities of Richer and Lorette. The abandoned road between Northwest Angle and Richer has mostly fallen into disrepair, except for segments that are now part of Provincial Roads 503 and 505, accessible via the Trans-Canada Highway from the north and Provincial Road 308 from the east. Much of Dawson Road in and around Winnipeg remains active and bears the original name but has been disconnected since the construction of the Red River Floodway and Lagimodiere Boulevard.

A cairn and plaque commemorating the Dawson Road was erected by the Historic Sites and Monuments Board of Canada in 1933. The landmark is located next to the local municipal office in Ste. Anne, Manitoba 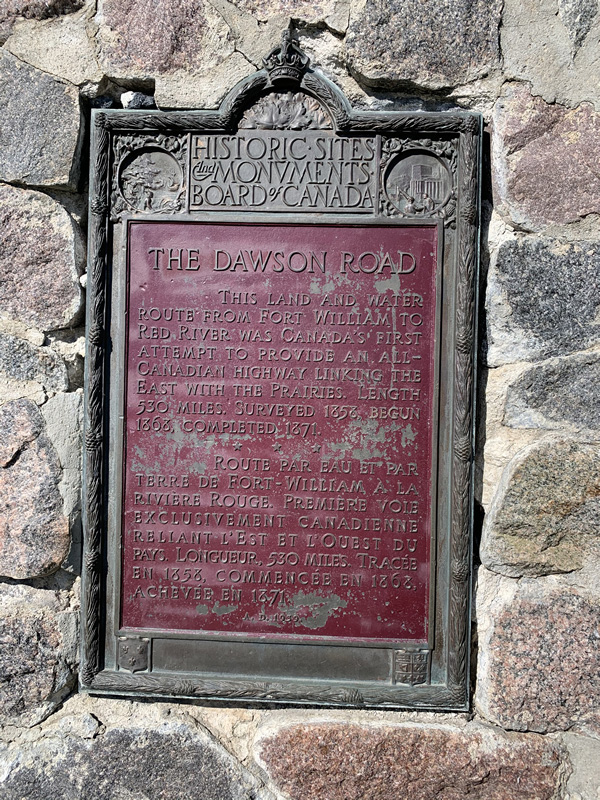 Communities in the constituency of DAWSON TRAIL

Media recognition
Winnipeg local band, Quagmire, has a song named “Anola, MB” on their 2005 album One For The Ditch.

Known as the Perogy Capital of Canadá.

Originally called Prairie Rose, is an unincorporated community recognized as a local urban district in the province of Manitoba, located about 30 km (18.6 mi) southeast of the provincial capital, Winnipeg, in the Rural Municipality of Taché.

In late 2017, bison located adjacent to Provincial Highway 405 (south of Lorette) had, repeatedly, found their way past their electrified fencing and onto the highway. Through social media, the bison, officially unofficially named Frederick “Freddy” The Bison, quickly became the LUD’s adopted mascot by many of the residents. Moving past social media, the story was reported by the CBC.

Notable people
Cynthia J. Faryon is an internationally published author who resides in Richer. Faryon focuses her writing on Canadian content with topics on travel, family issues, biography, and history. One of her well-known works has been Unsung Heroes of the Royal Canadian Navy: Incredible Tales of Courage and Daring During World War II.

The very first families to establish themselves in this area were French, beginning in 1900. At first, the village bore the name Saltel, in honour of Norbert Saltel’s family.
Later, the parish adopted the name of St. Geneviève, patron saint of Paris, to recognize the first settlers, most of them French. The breeding of livestock and milk production became the community’s main livelihood for many years.

Check out the Dawson Trail Map